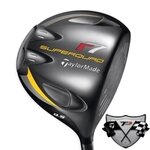 - TaylorMade
Exceptionally low-deep CG and massive clubface area is easy to launch on a high, strong trajectory for long carry and phenomenal distance. TaylorMade RE*AX TP shafts by Fujikura reduce ovaling in the mid-section and promotes stability, consistency and increased clubhead speed. Effective MOI (eMOI) is the positive influence on ball speed on off-center hits that's exerted by the combined effects of a driver's MOI and clubface technology (versus constant-thickness clubfaces).

Add To My Bag
Reviews/Comments

lanikane68 - 8/24/22
What I like most about the R7 SUPERQUAD BLACK TP is that Fujikura's TaylorMade RE*AX TP Shaft reduces the oval in the mid-section and promotes stability, consistency, and increased clubhead speed. quordle moviedle

paulachase07 - 7/26/22
Since the release of the 9.5 and 10.5 models, I've been playing them. I've tried to increase distance by using lighter weights and 45 gram Graffaloy Prolaunch shafts, but I've had mixed results. It appears that rearranging weight for directional/trajectory control does nothing.
The upper portion of the face appears to be the most powerful. On the bottom, it feels like a dead-solid, perfect hit, but it veers off into the abyss.
When it comes to the latest gadgets, it's hard justifying the cost of $400 for an old man to get some distance. trap the cat