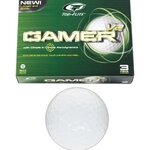 - Top-Flite
The new Gamer V2 features all the 3-piece performance of the original Gamer with even more distance, softer feel and better durability. Top–Flite has taken the benefits of award-winning Dimple in Dimple Aerodynamics and wrapped it around a reformulated soft, thin ionomer cover that provides Tour-like spin and control around the green with longer, explosive distance. So if you’re looking for a ball that gives you everything you need from tee to green and won’t break the bank.

Add To My Bag
Reviews/Comments

birdiexris - 9/15/10
I got a sleeve of these from the WAHC. At the urging of a friend i decided to give them a shot. I'm pretty impressed with this ball for the money. I play ProV1x normally and it's a fantastic ball. The Top Flite Gamer V2 isn't far off, but it' IS noticeable.

First off. This ball is damn long. It's about as long as the V1x. So, if you play a premium ball, you wont' lose any distance with this baby so don't worry.

Second, it's workable. While it seemed to fly strait when i wanted, it was easily workable off all clubs. There wasn't a whole lot of "tailing" from unwanted side spin.

First con - it's hard. It has a much more "clickey" feel off every club than a "premium ball" That being said, you can get used to it, but if you like to really feel the difference between a well struck shot and a mishit, you may not like it. There's a difference, but not a lot.

Second con - backspin. While the ball IS workable, it seems like it doesn't afford the backspin of a premium ball. Most likely due to the harder (but more durable) cover. I hit two shots, nearly identically with the same club within a groove-distance of similarity and my normal ball backed up about 5 feet. The Gamer stopped dead. A good result, but i'm a player and i like to have that option to check and stop or draw it back. I couldn't put enough spin on these to draw back more than maybe a foot. That being said, none of the shots really "bounded" forward either, so it's got a little better than "bargain ball " spin.

Bottom line - if you're a player and it's getting expensive or you think you're going into a tourney where you may lose a bunch of balls - these are for you. I think i have to use them for a while longer to determine if i want to make a "switch", but in a pinch they're definitely a good buy.